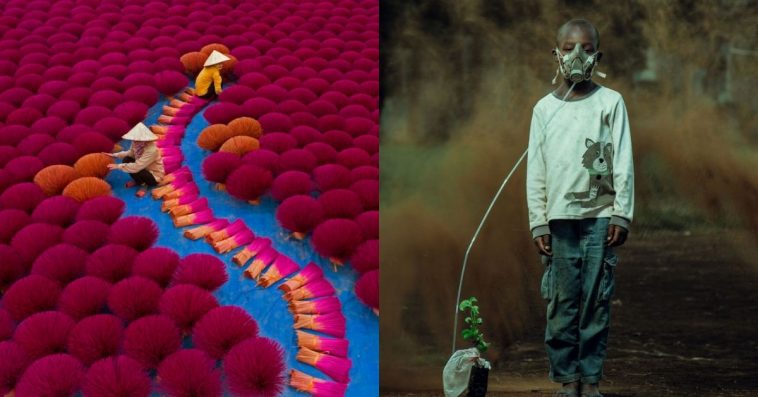 The world is changing at a very fast rate. Although people could not see any change in real-time a decade ago, now they can. People get to face a lot of natural disasters caused by climate change. Rising sea levels, wild fires, floods, pollution, global warming, and all sorts of other natural disaster is becoming a constant element in nature.

Everyone is to be blamed for this, the mass consumerism fueled by big companies which are allowed by governments. Everybody took and still takes part in this act of destruction. So, the aim of choosing ‘The Environmental Photographer of the Year’ or ‘EPOTY’ is to provoke the world and send a message through a visual medium of how the world has changed. Just like they did 13 times before, EPOTY.org held their competition for the year of 2021.

This year, the winners got a special chance that their previous winners didn’t. The winners of this competition got their winning photos, announced at one of the most prestigious and important events for mankind in the present day. UN Climate Change Conference (COP26) which was held in Glasgow, Scotland was the event that the winners of the EPOTY 2021 were revealed.

The title was earned by Antonio Argon Renuncio, a photographer from Spain. He presented a picture of a baby sleeping in a house in ruins in Ghana due to coastal erosion. During this very fateful decade on this planet, we should seriously make changes ourselves and urge our own governments that we need this planet for ourselves and our future generations to come. Let’s all rise above hate and greed to create a world that cultivates love and positivity.

With that light of hope in our hearts, we listed down the winners of this competition below. Scroll down to have a look and let us know what you think about these photos. Visit their website and social media accounts to know more about their work and to check out more photos. 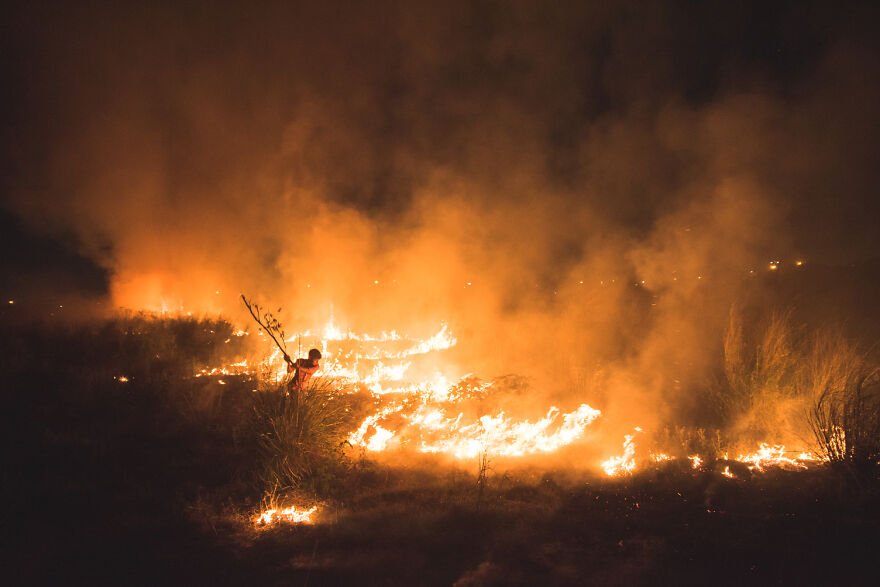 "A boy fighting surface fires in a forest near his home in Yamuna Ghat, New Delhi, India. According to locals, forest fires caused by human activity in the area are a common occurrence due to adverse living conditions." 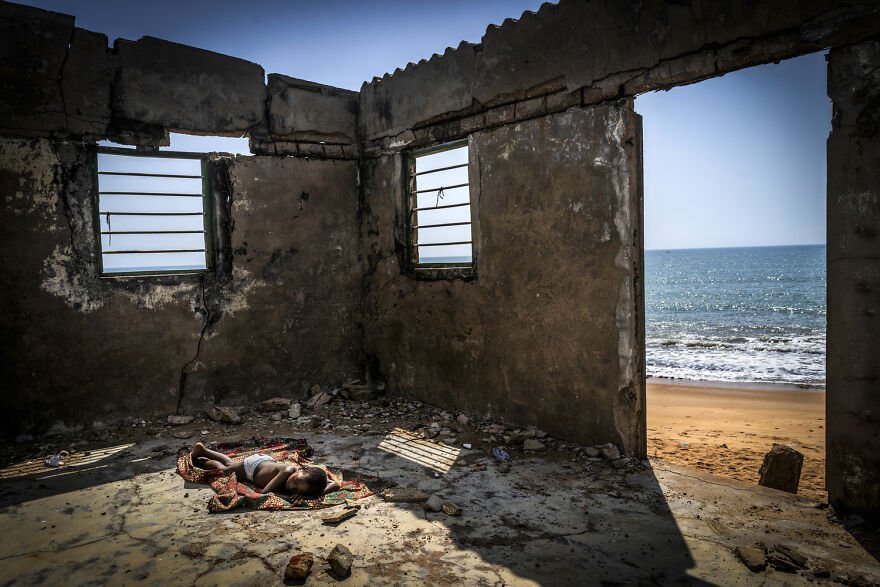 "A child sleeps inside his house destroyed by coastal erosion on Afiadenyigba beach. Sea levels in West-African countries continue to rise and thousands of people have been forced to leave their homes." 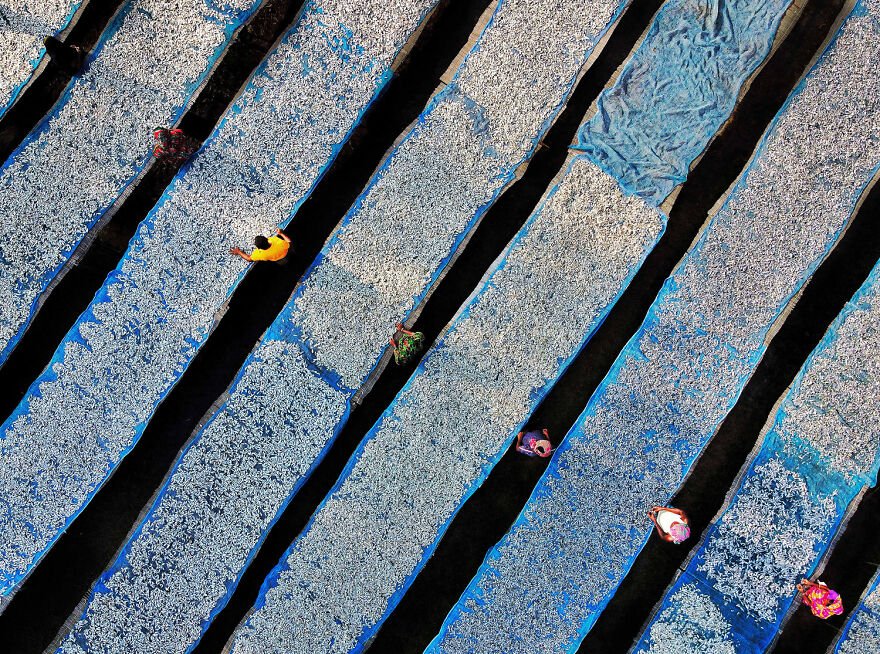 "Dry fish terraces cover vast areas of the Sirajganj district. Dry fish production is the primary source of employment for many rural families near the Chalan Beel, which is under threat due to anthropogenic environmental impacts." 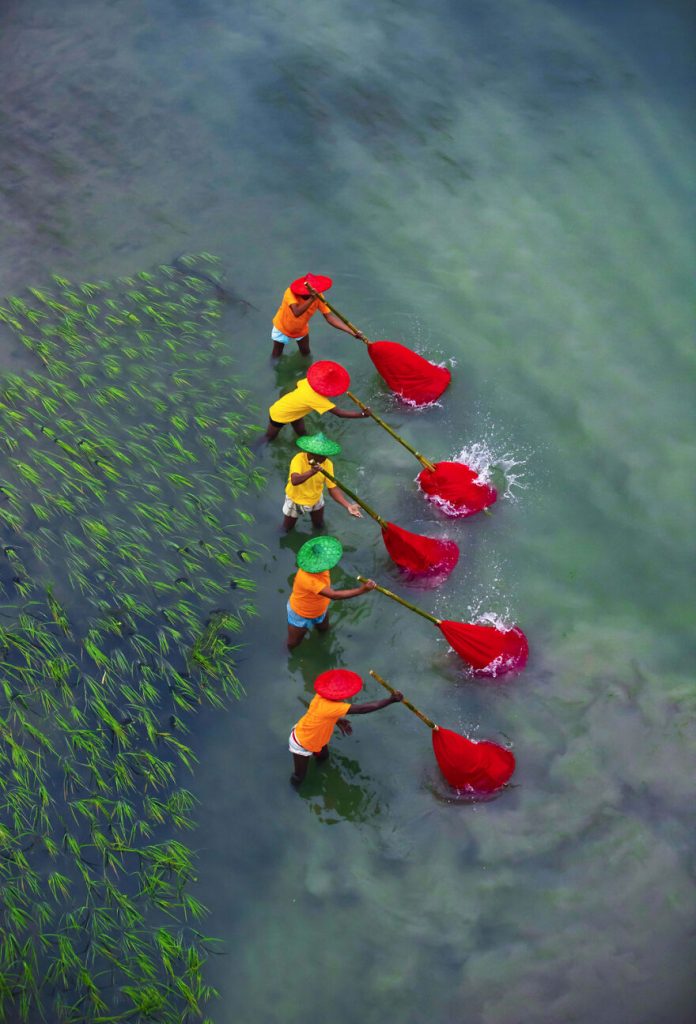 "Fisherman cast their nets in the algae near Sontola Bridge. Algae accumulates in the rivers of Bangladesh during the dry season." 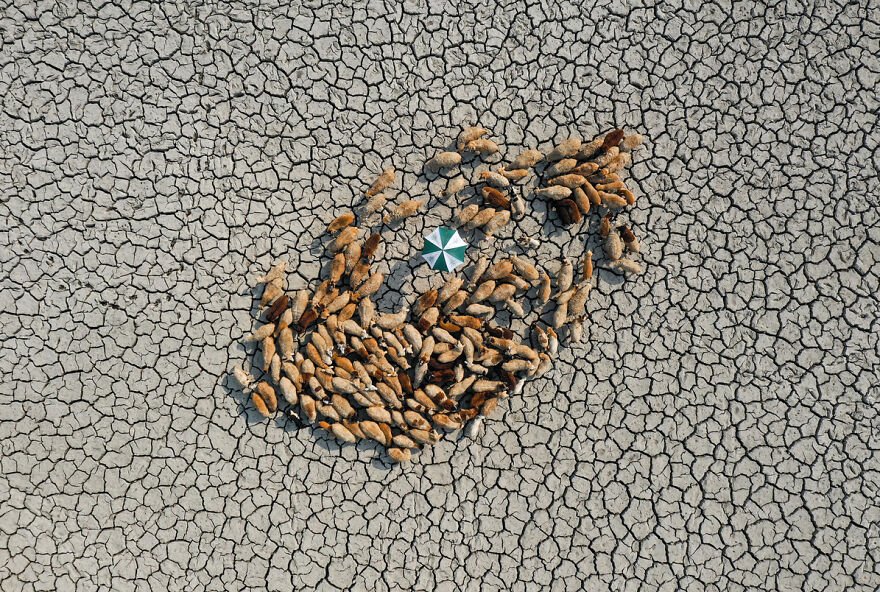 "Flocks of sheep search for grass amongst the cracked soil. Extreme droughts in Bangladesh have created hardships for all living beings." 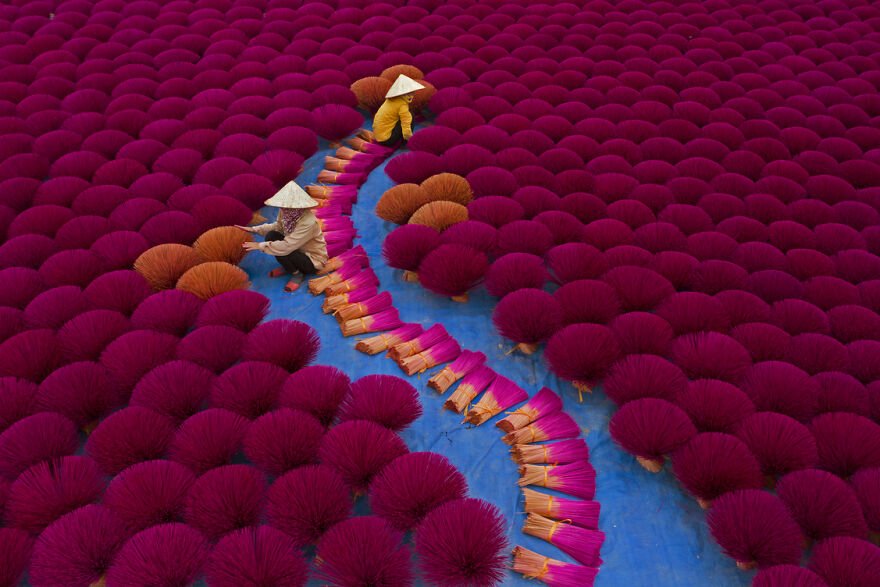 "Workers sit surrounded by bundles of incense sticks in Quang Phu Cau village in Hanoi, Vietnam. Incense has been made using traditional methods here for hundreds of years and plays an important role in the spiritual lives of Vietnamese people." 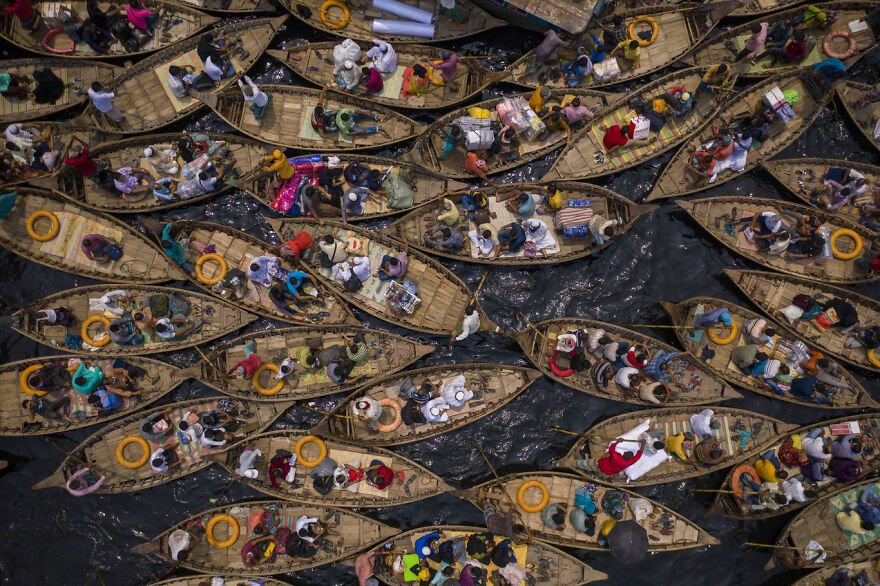 "A busy polluted waterway on Buriganga River is filled with boats and their passengers on the morning work commute to the densely populated city of Dhaka, home to an estimated 21 million people." 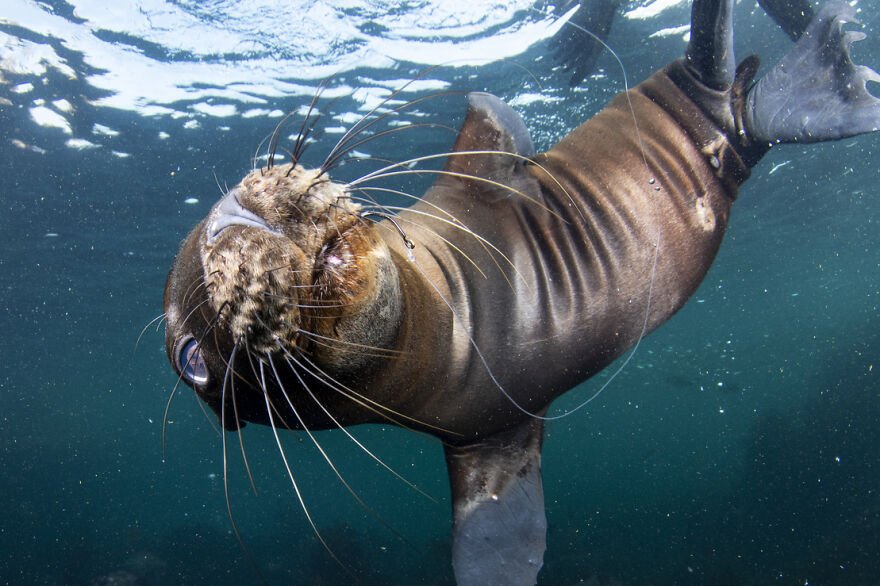 "A California sea lion pup with a hook embedded in his mouth follows the diver and seems to be asking for help." 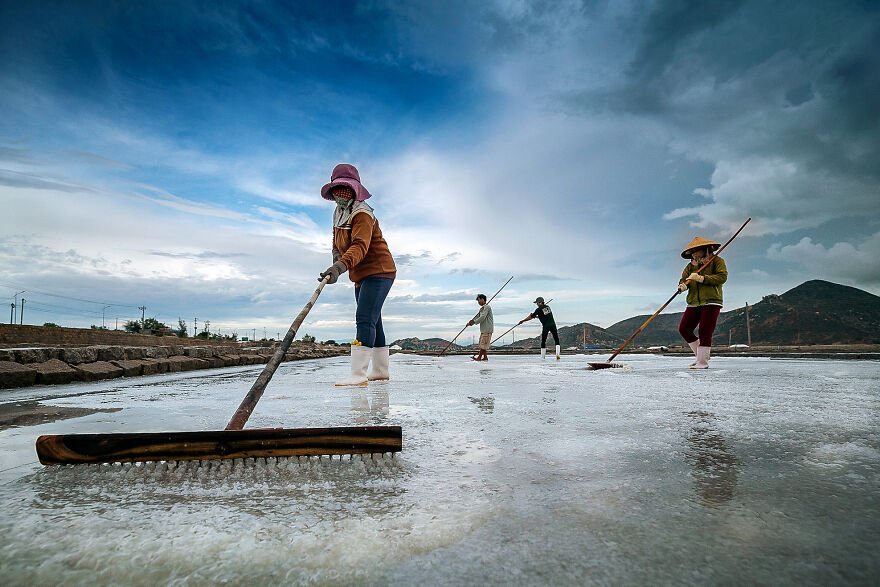 "Salt farmers in the Dam Vua salt field begin their day early raking salt into piles before the sun gets high. The salt particles are crystallized after the seawater in the field evaporates." 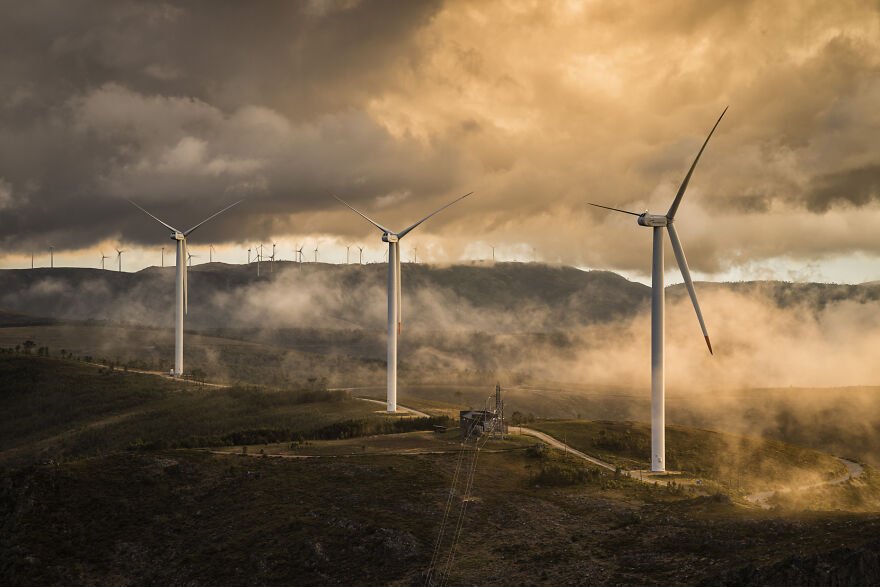 "Wind turbines on the mountaintops are captured moments before sunset on a cloudy day." 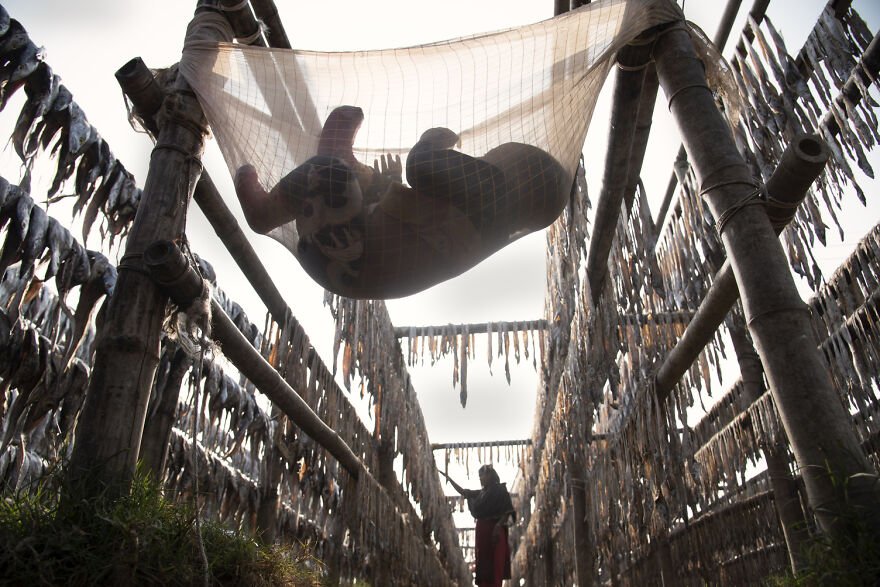 "A working mother in an open-air fish drying rack provides for her family with her baby cradled in the rack nearby." 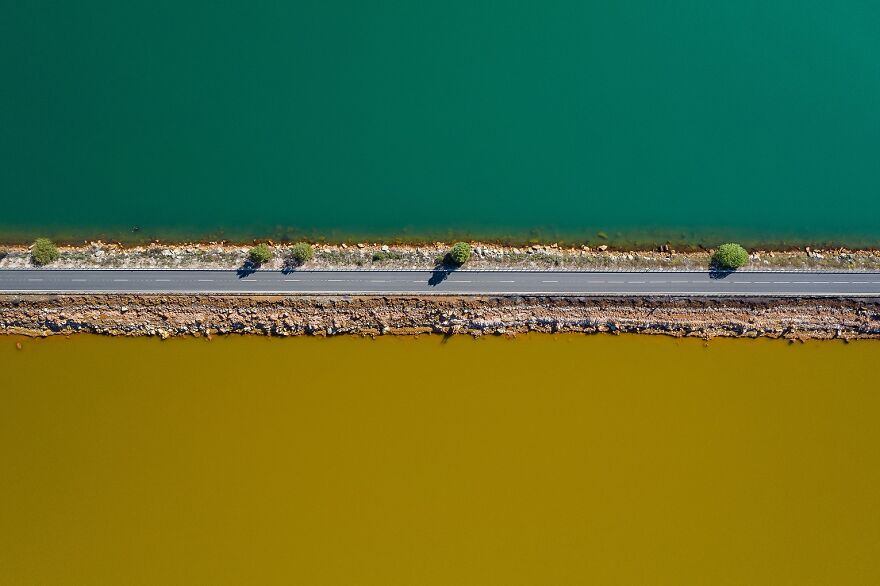 "A narrow strip of road divides ochre-colored and freshwaters. Trees wait on the fresh side of the road opposite the toxic waters of a nearby mine reservoir." 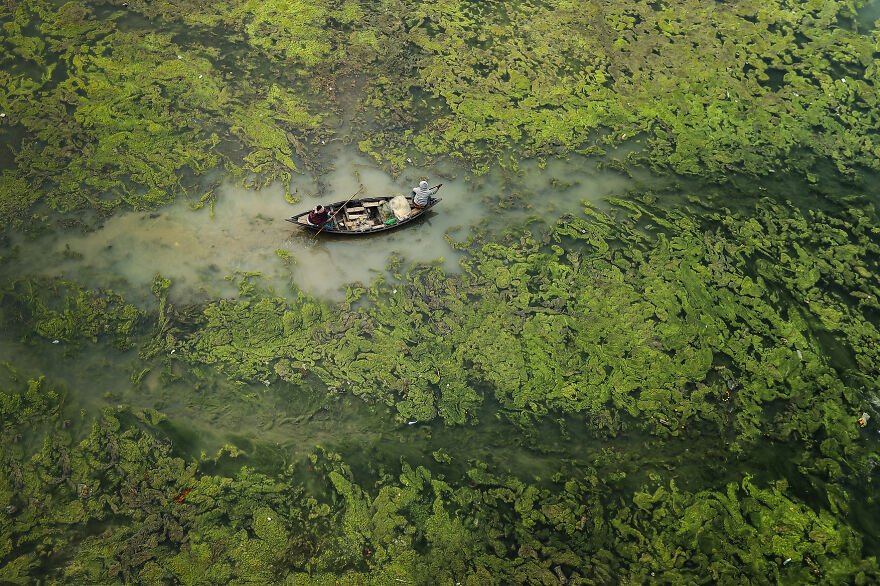 "Irregular monsoon seasons and droughts cause algal bloom on the Damodar river. Algal blooms prevent light from penetrating the surface and prevent oxygen absorption by the organisms beneath, impacting human health and habitats in the area." 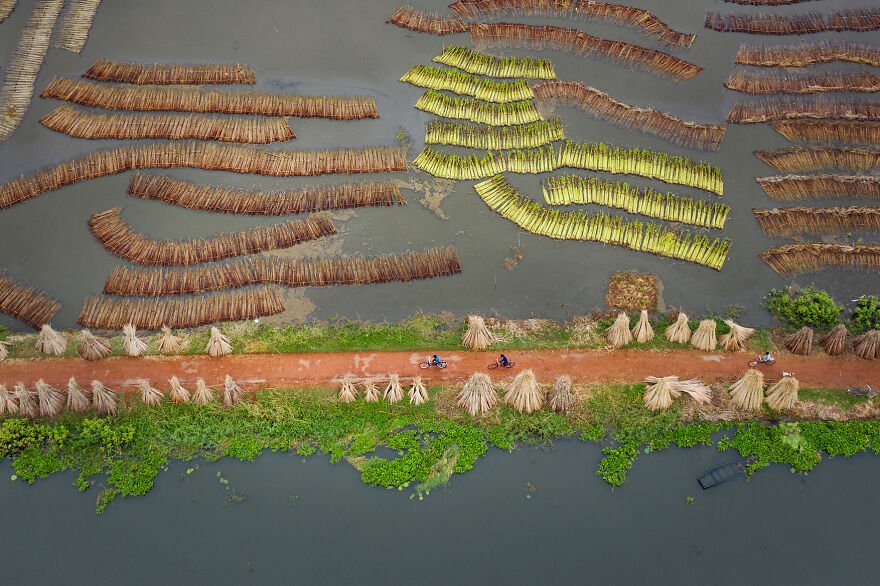 "Jute is grown in the Ganges Delta. Jute is a sustainable alternative to plastic with a low cost of production. The government in India is supporting the development of the jute sector." 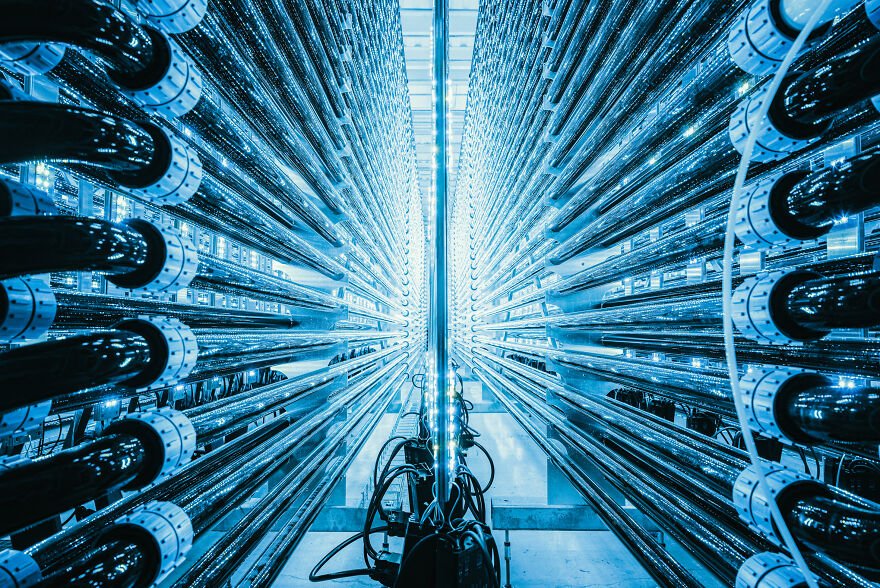 "A photobioreactor at Algalif’s facilities produces sustainable astaxanthin products. Iceland has shifted from fossil fuels to 100% of electricity and heat from renewable sources." 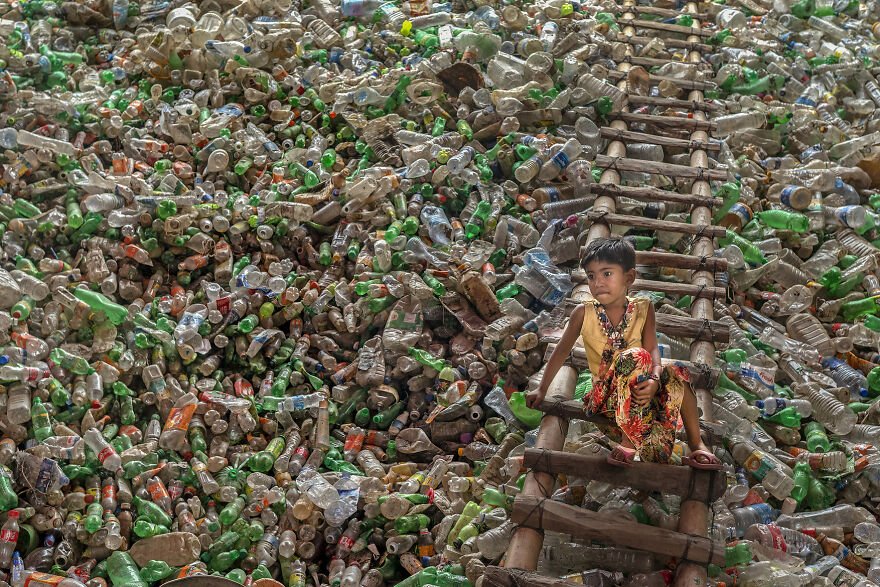 "A child sits on a ladder in a plastic bottle recycling factory in Bangladesh. PET recycling in Bangladesh is a growing industry, however, collection and sorting are predominantly manual." 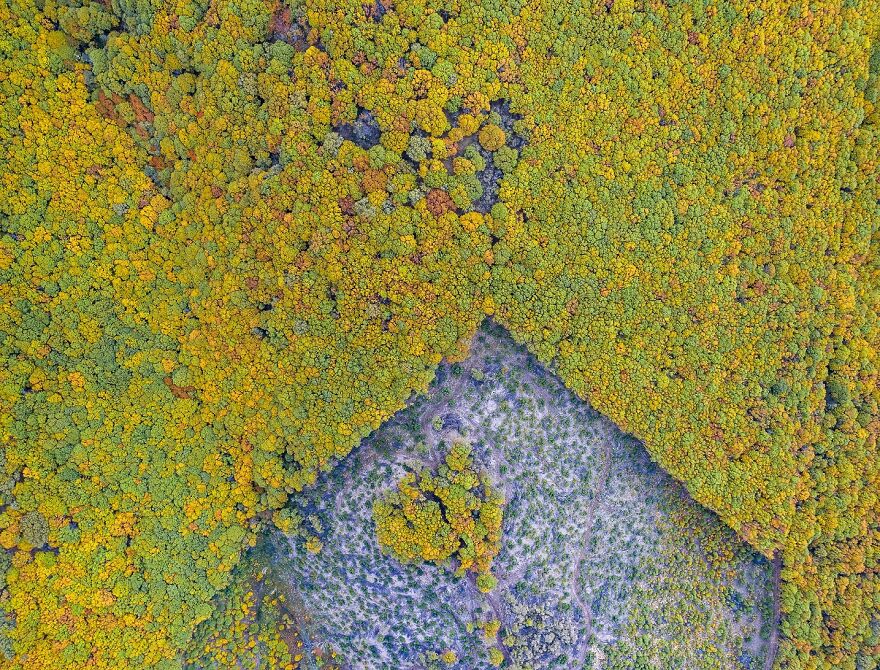 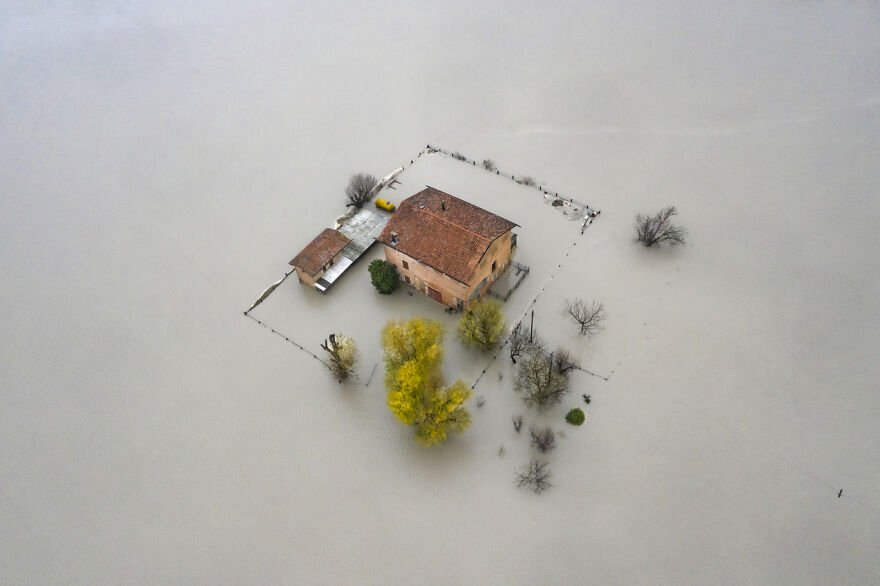 "A house is submerged by the flooding of the River Panaro in the Po Valley due to heavy rainfall and melting snow." 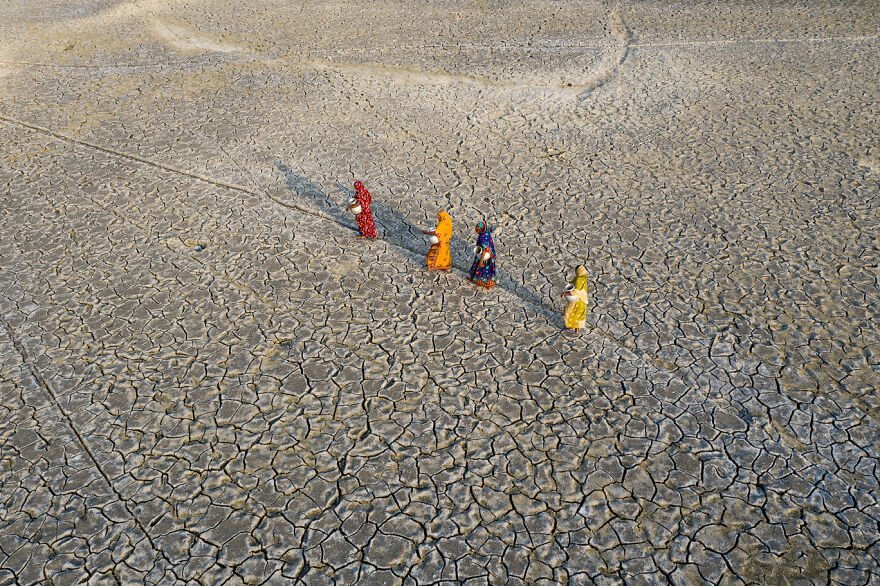 "Women search for water in Shora-9 of Gabura union in Satkhira. Over a decade after cyclone Aila, freshwater ponds and wells have become increasingly saline. Women are traditionally responsible for collecting water and make multiple trips over long distances to supply their families." 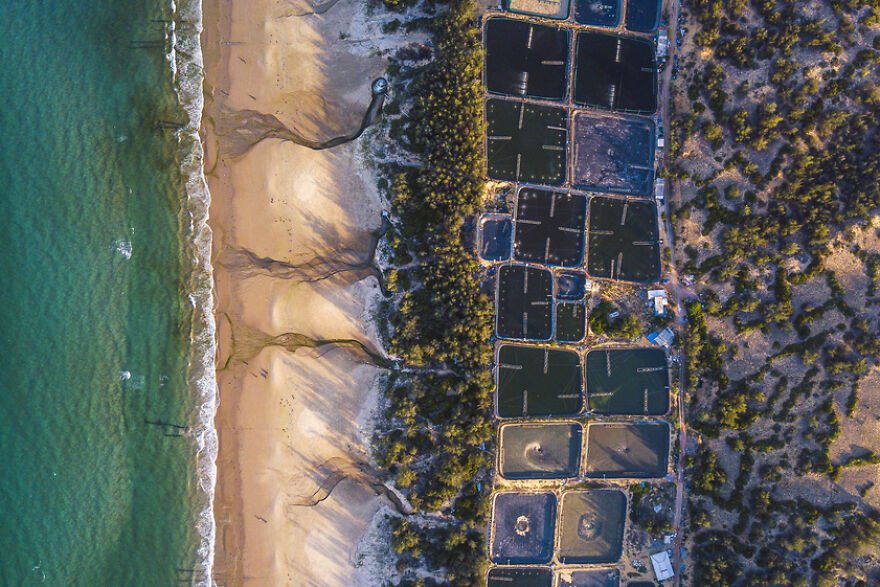 "Aquaculture from ponds near the beach discharge directly into the sea and cause pollution to the marine environment." 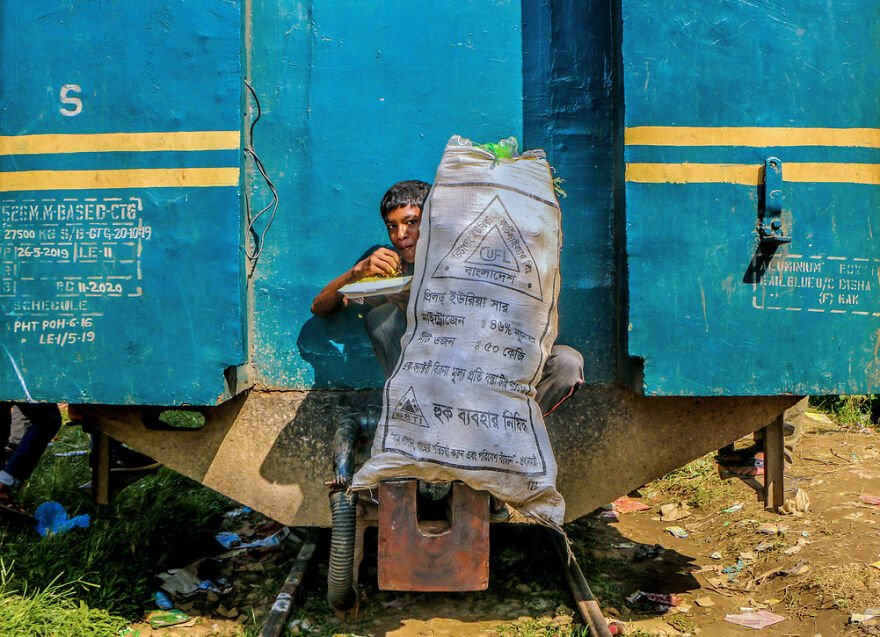 "A boy with plastic items to sell to a local factory in Chittagong. Children risk dangerous conditions collecting plastic, metal and other dumped waste to earn a living." 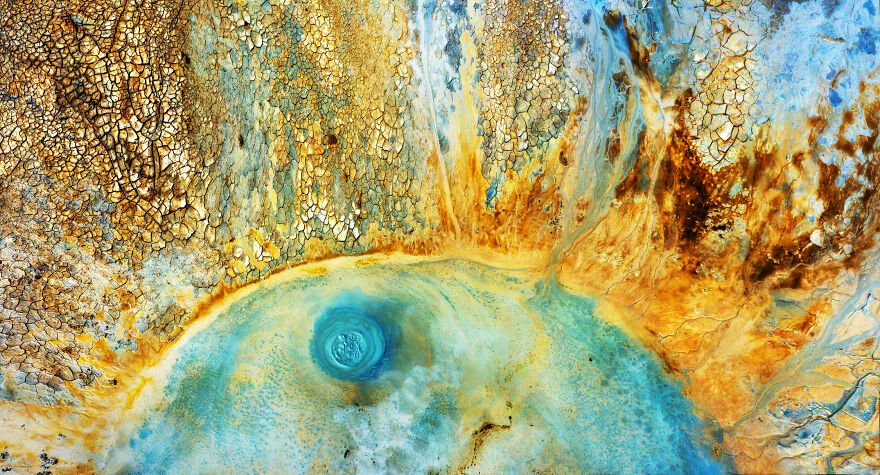 "The Valley of the Mud Volcanoes is at risk due to climate change and human activity." 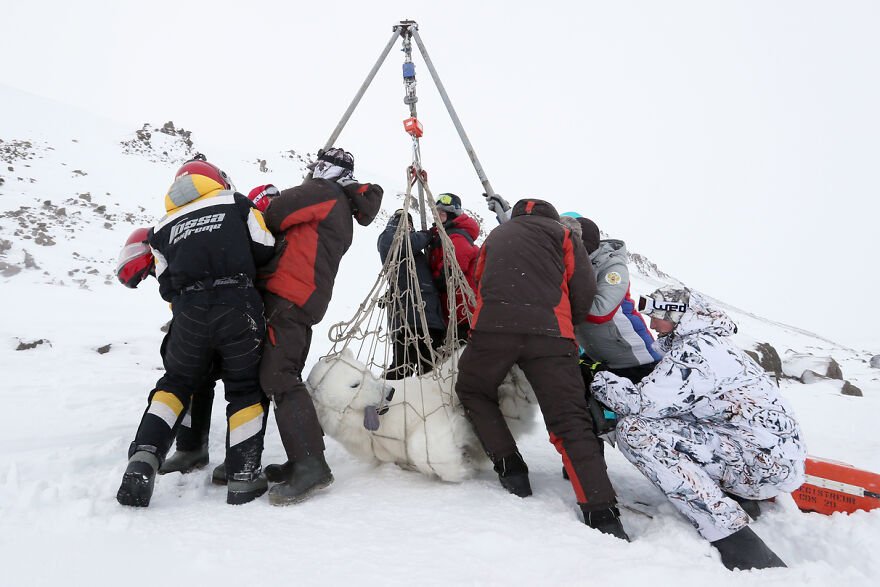 "Researchers weigh an anesthetized Polar bear on Franz Joseph Land in the Arctic Ocean. The expedition, organized by the Russian Geographical Society, aims to monitor the local polar bear population and assess the impact of climate change." 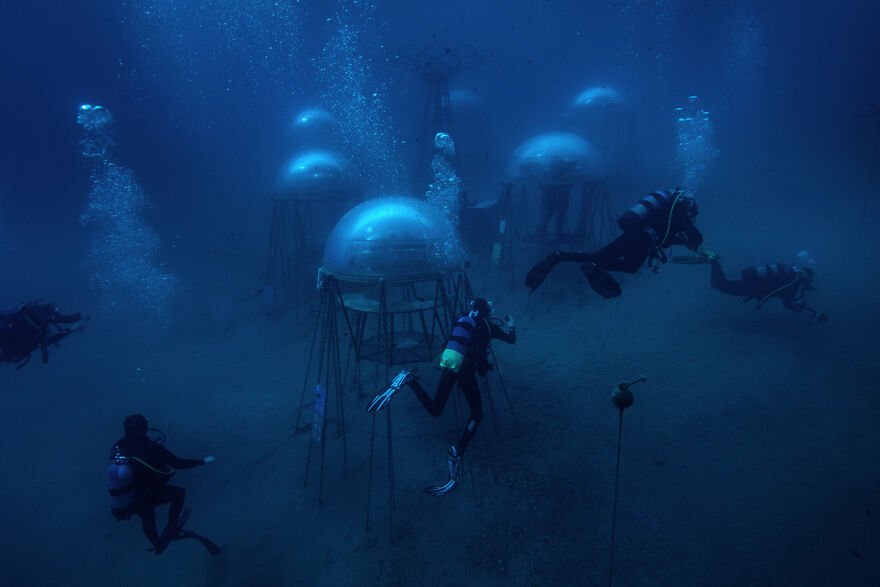 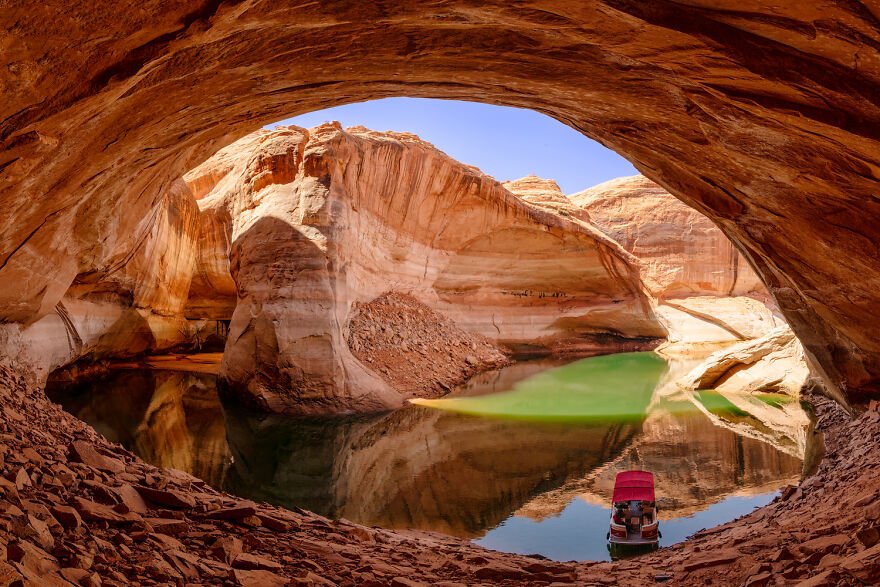 "Originally named for its natural resemblance to a cathedral, the monument has been buried nearly 100 feet under the flood-waters of the Lake Powell reservoir since 1963. Droughts reduced the water level in 2021 enabling this image of Reflection Canyon." 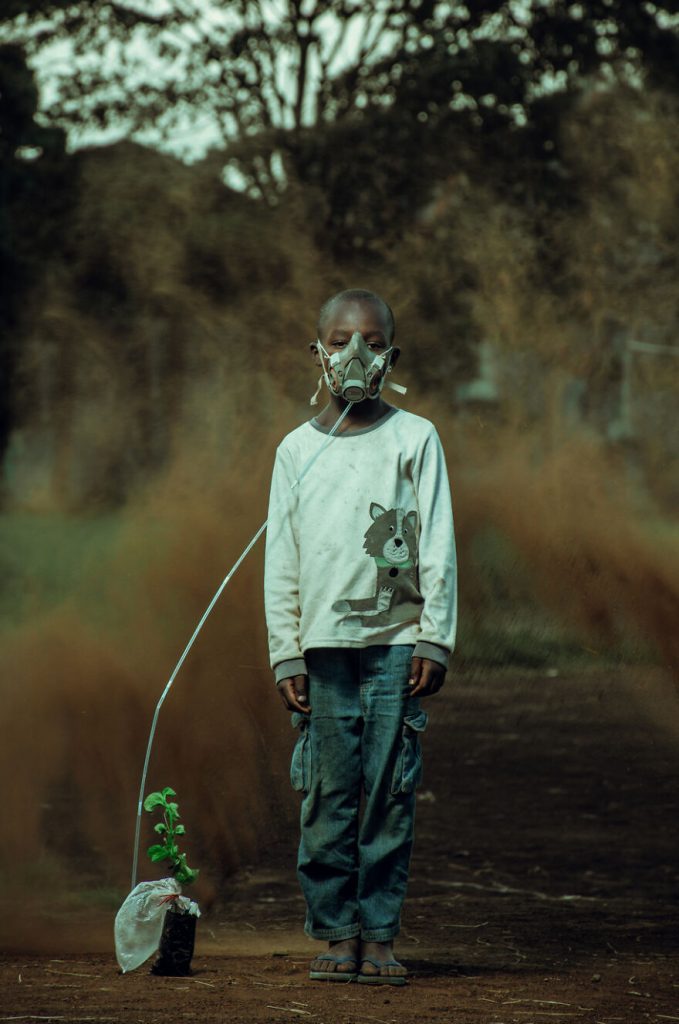 "A boy takes in air from the plant, with a sand storm brewing in the background. This is an impression of the changes to come."