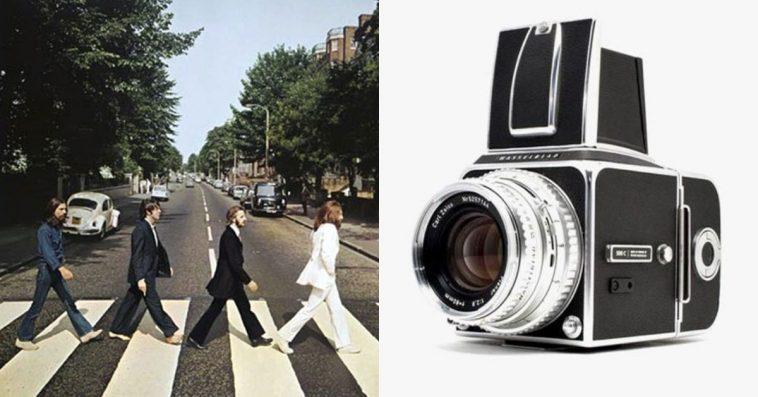 Photographs are not merely pieces of images that we look at. They are memories, emotions, and life, literally frozen in time. We are taken back in time to the time of the photos or the time that we first saw it. This is the amazing emotional command that photos wield.

It is amazing how this one form of art bound with tech manages to create such an impact in preserving time. Most of the time, we are reminded of the times and the stories that are associated with the events when we look at a photo. But we never give it much of a thought about the person who captured it or the camera that captured the photo.

But behind every one of those iconic photos, there is a camera and a photographer who acted in a way to capture the shot that now lives forever. So, it is important to know and give the necessary credit to the person who is responsible for the creation of a certain photo. It can be a very popular album cover or a magazine cover that is timeless, or it can be in a very dreaded place that very well could be the D-day of World War II. Whatever the scenario it is, some person made the decision to make it immortal by capturing it on camera.

Since a lot of people are being transported through time because of these photos. We thought of sharing some of the most iconic photos in history with the camera that they were shot in. In a world where millions of photos are being captured in one single day, these single photos create a huge impact.

Scroll down to check out these historical photos that mark amazing points in human history along with the cameras that they were shot with. Share what you think about the photo, the scene, and the camera in the comments sections below. 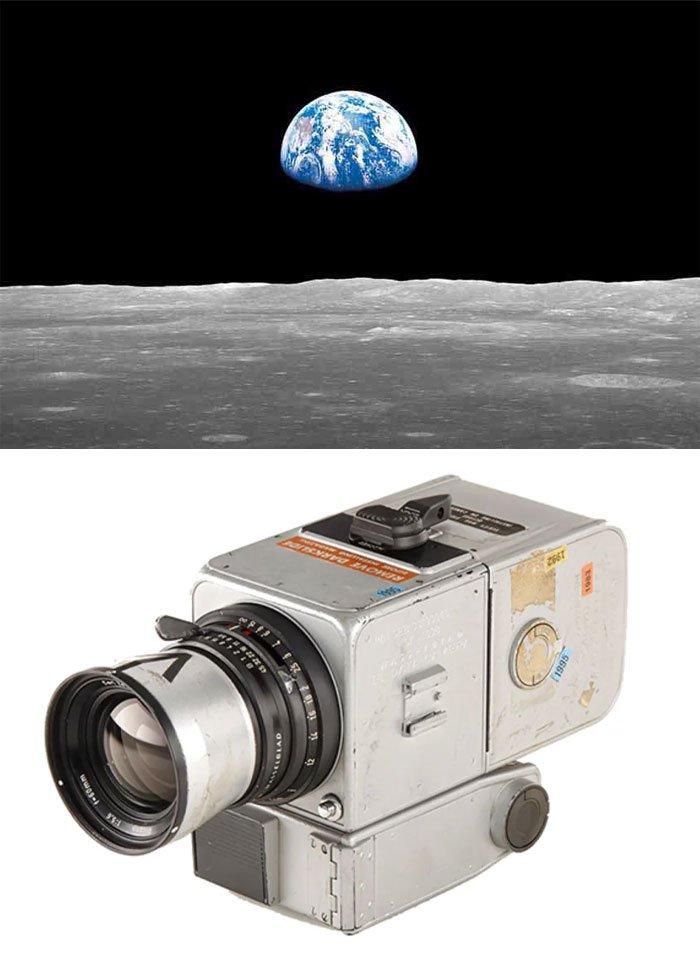 This photo by astronaut William Anders, titled “Earthrise” was taken during the Apollo 8 mission on December 24, 1968. The astronaut used a heavily modified Hasselblad 500 EL camera with an electric drive. The photo was captured on custom 70 mm Kodal Ektachrome film. 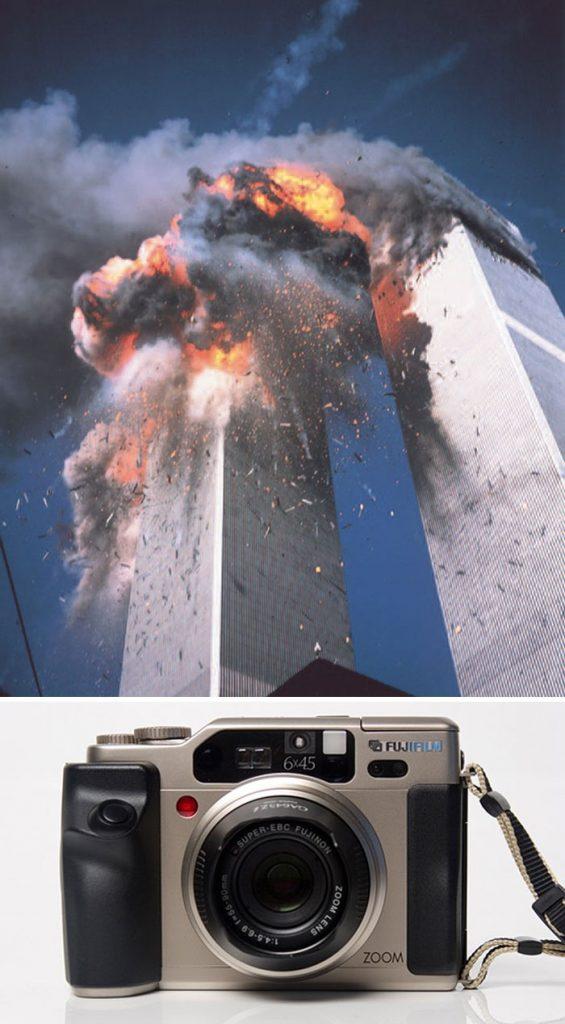 Photographer Lyle Owerko captured the tragic events of 9/11 using a Fuji 645zi camera. One of the photos he took that day even made it to the cover of TIME magazine. 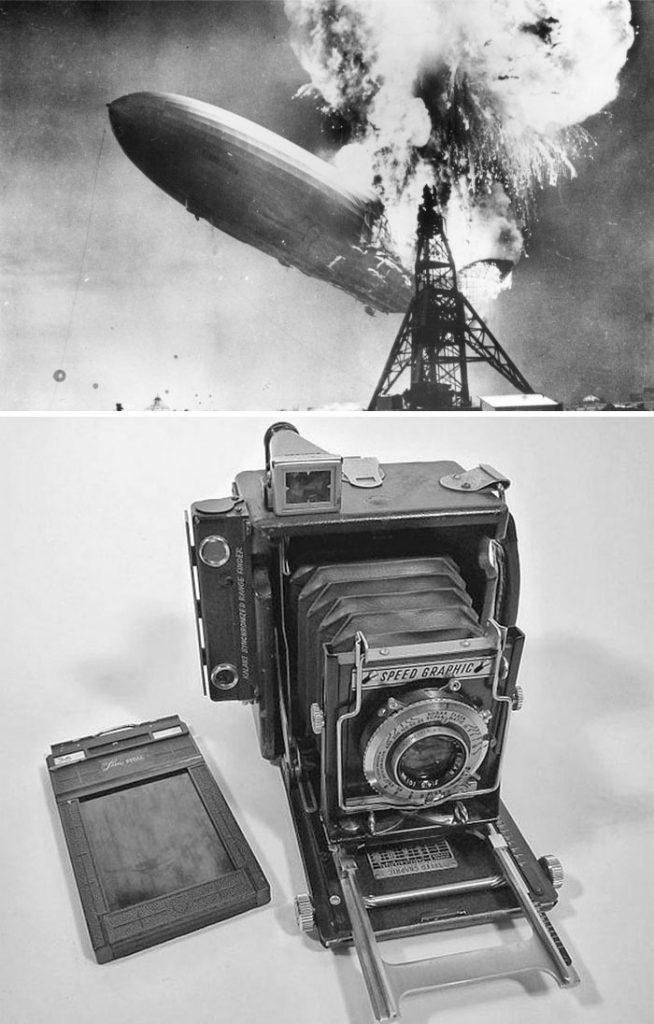 The Hindenburg airship disaster that happened in Manchester Township, New Jersey on May 6, 1937, was captured by Sam Shere using a Graflex Speed Graphic camera. Out of the 97 people that were on board during the flight, 36 died. 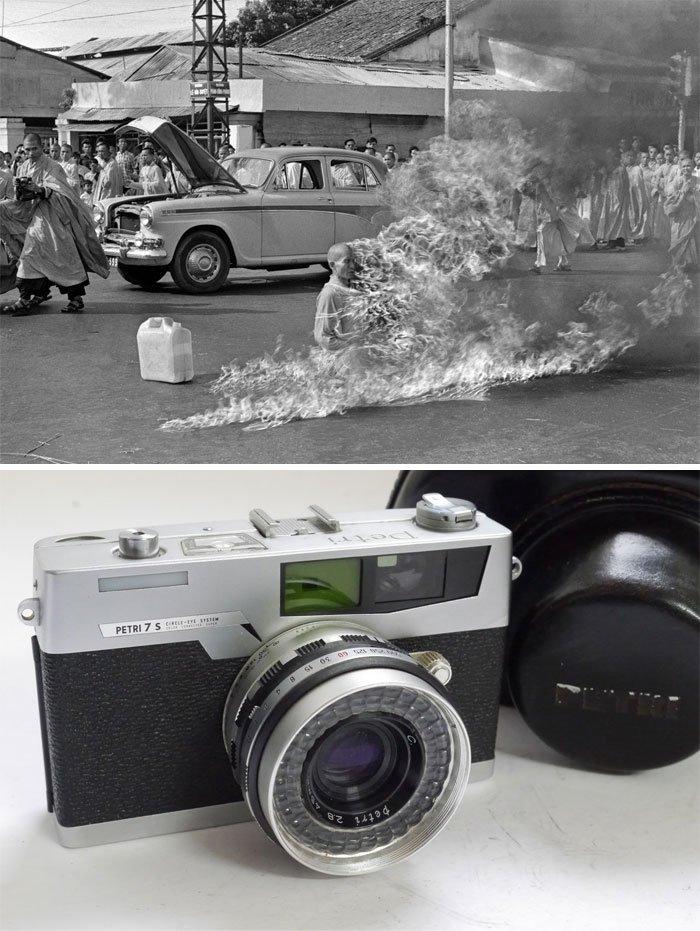 Malcolm Browne used a simple Petri rangefinder camera to capture the iconic photo of Thích Quảng Đức, a Vietnamese Mahayana Buddhist monk who set himself on fire in Saigon back on 11 June, 1963.

The iconic portrait of the Afghan Girl, Sharbat Gula, was captured by photojournalist Steve McCurry back in 1984 using a Nikon FM2 camera. The photograph made it on the cover of the June 1985 issue of National Geographic but the girl’s real identity remained a mystery until 2002. 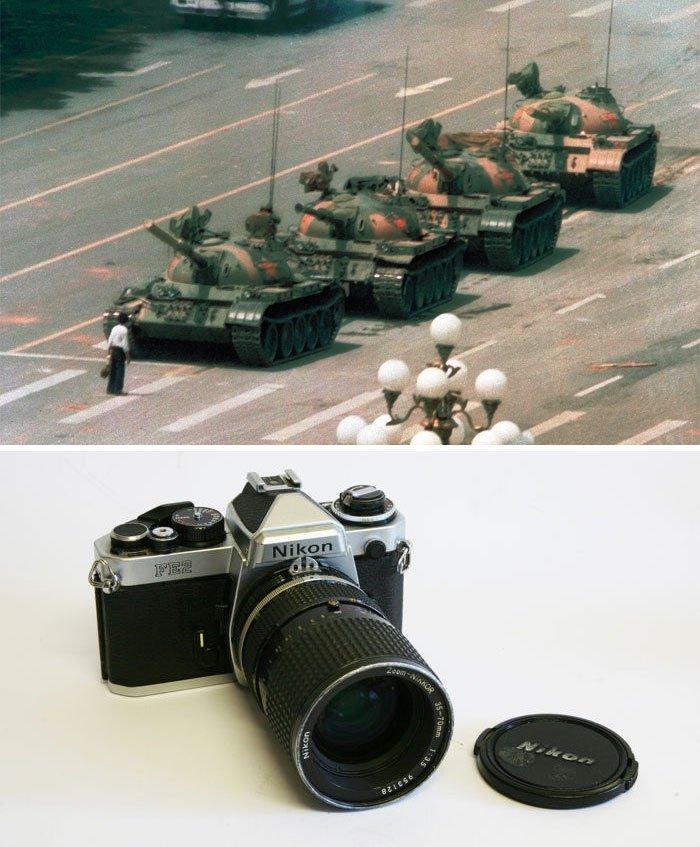 The unidentified Chinese man, nicknamed Tank Man, that stood in front of a line of tanks leaving Tiananmen Square on June 5, 1989, was captured by photographer Jeff Widener on a Nikon FE2 camera.

This dramatic photograph of Florence Owens Thompson and her children was captured by photographer Dorothea Lange on March 6, 1936. The photo was taken inside a pea-pickers’ camp on Nipomo Mesa after freezing rain destroyed the crop, leaving the workers without work and pay. 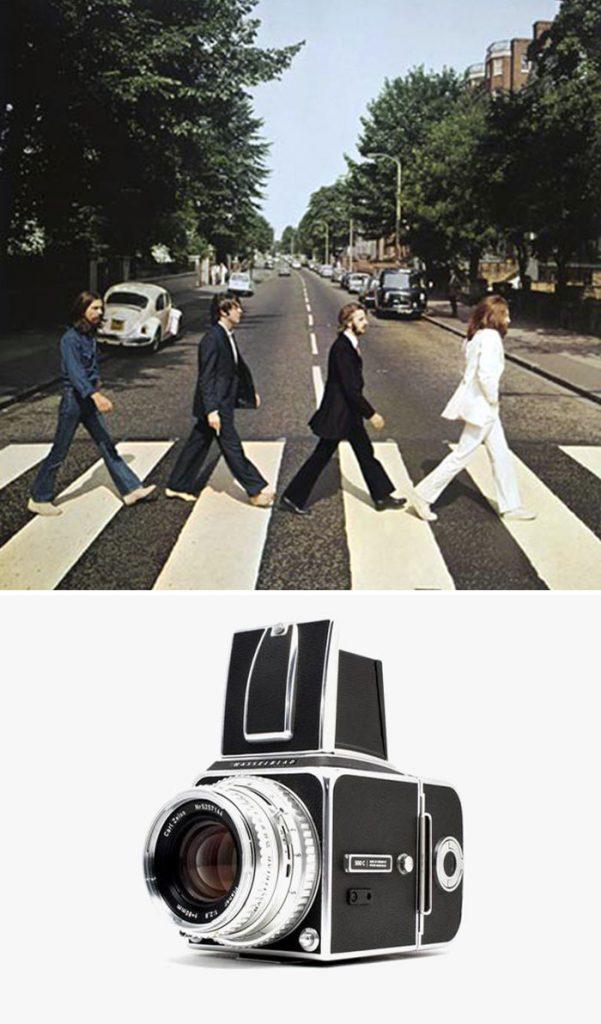 The legendary photo of The Beatles on Abbey Road was captured by photographer Iain Macmillan back in 1969. The photographer used a Hasselblad camera with a 50mm wide-angle lens. 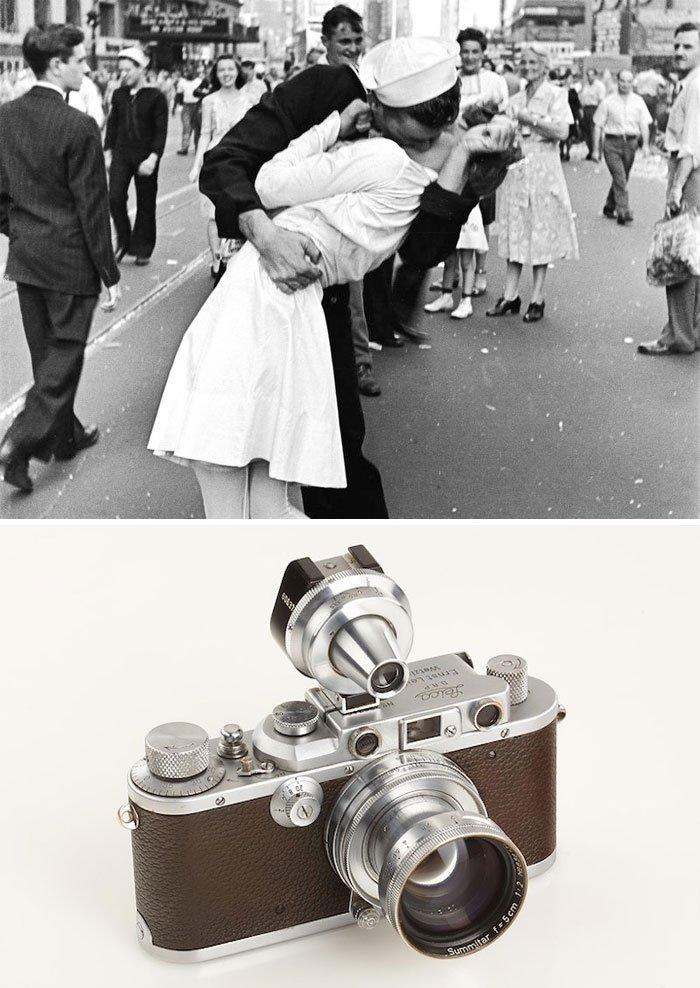 Photographer Alfred Eisenstaedt captured this photo of a US Navy sailor kissing a stranger in New York City’s Times Square back on August 14, 1945. Even though many people claimed they are the ones in the pictures, the real subjects in the photo are unknown. 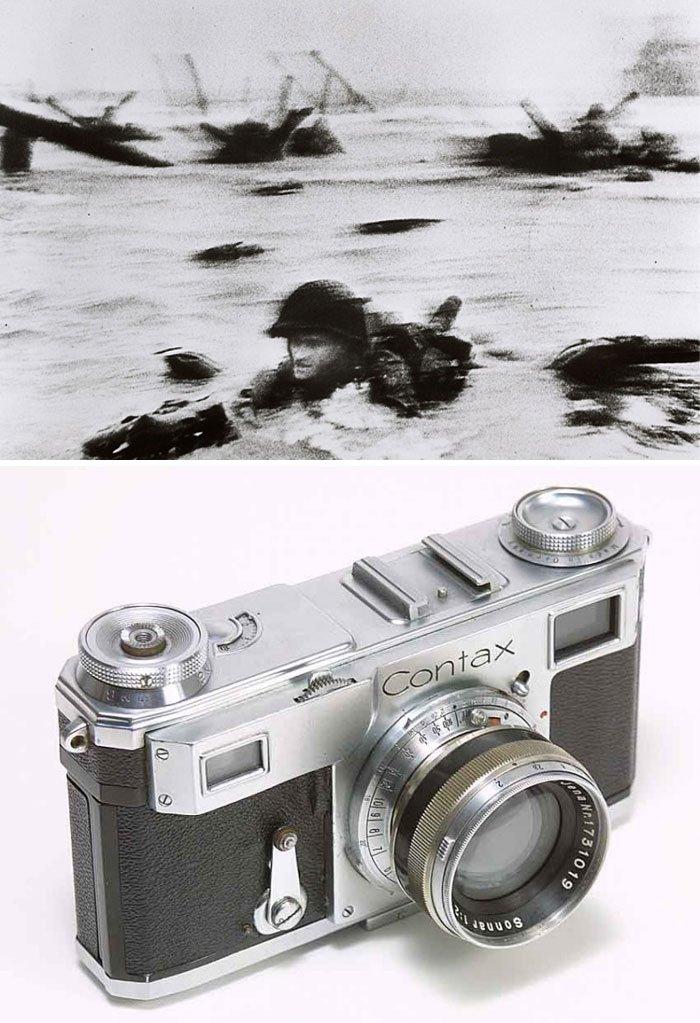 Photographer Robert Capa captured the events of D-Day using his Contax II camera. He was one of the first troops to land on Omaha Beach and managed to take 106 pictures while under fire. Sadly, only 11 of those survived due to a processing accident in the Life magazine photo lab in London. 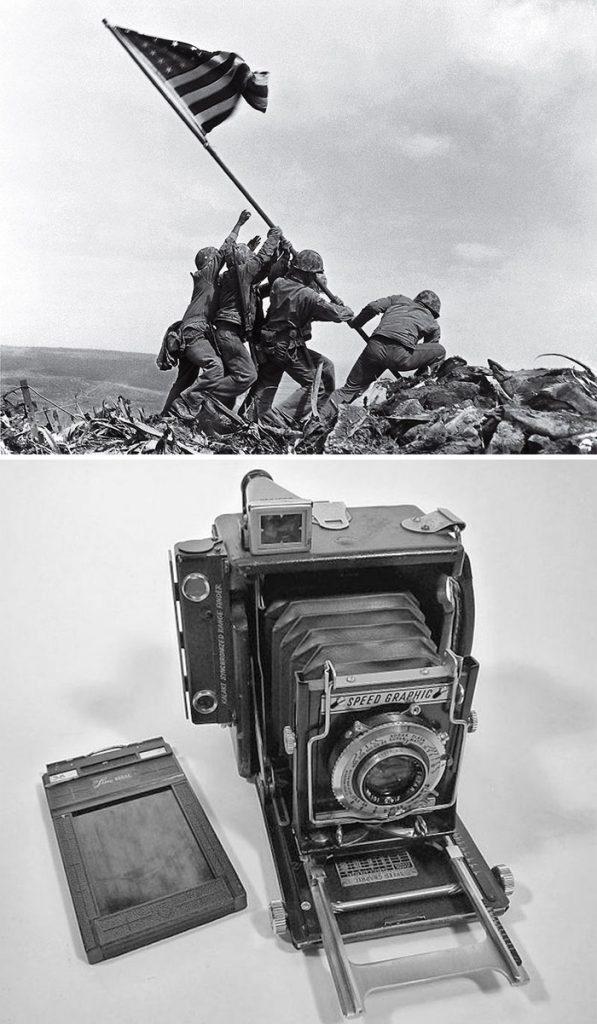 Photographer Joe Rosenthal captured this photo of six US Marines raising the flag atop Mount Suribachi during the Battle of Iwo Jima on February 23, 1945. Sadly, three of the six soldiers were killed in action during the few following days. 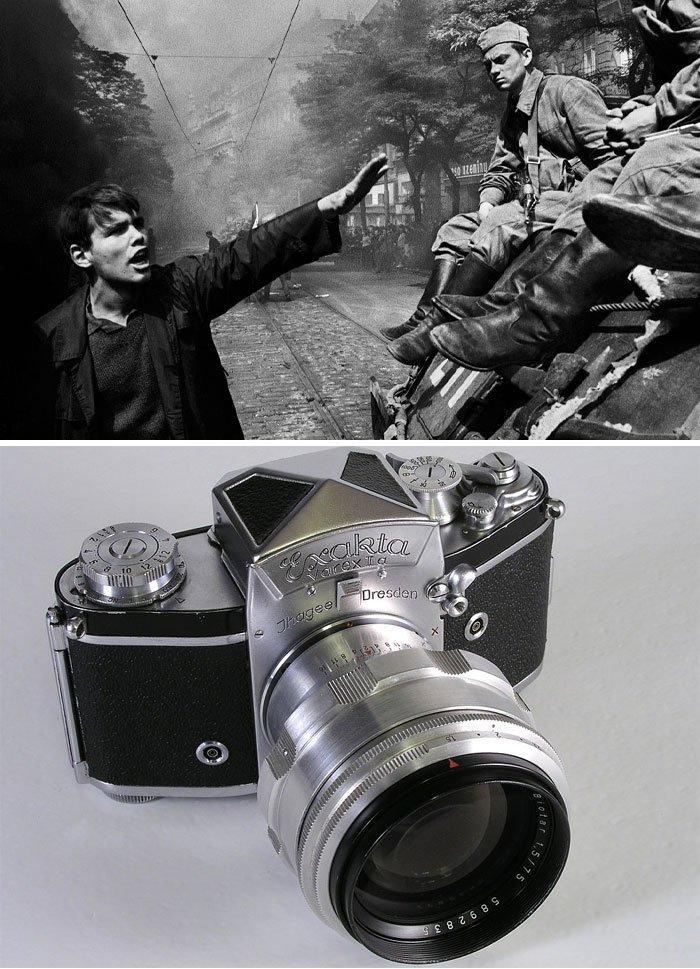 Photographer Josef Koudelka captured the military forces invading Prague back in 1968. His negatives were smuggled out of Prague and anonymously published in The Sunday Times Magazine under the initials P. P. (Prague Photographer). 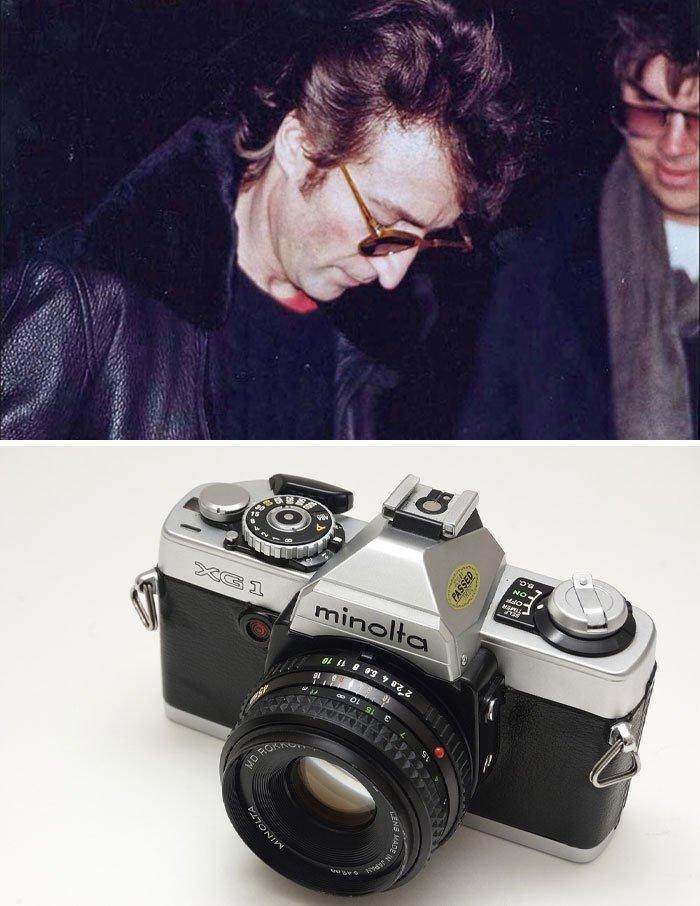 This chilling photograph of John Lennon and his would-be killer Mark David Chapman was captured by photographer Paul Goresh just hours before the legendary Beatle was shot near his home in New York City. 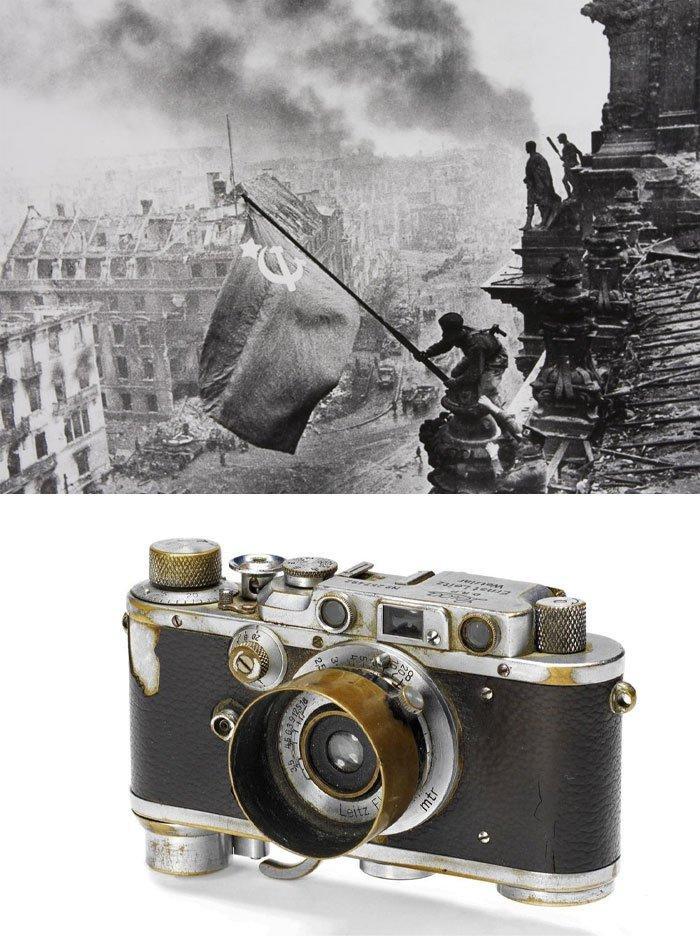 Photographer Yevgeny Khaldei took this picture of Russian soldiers raising a flag over the Reichstag during the Battle of Berlin on 2 May, 1945 using his Leica III camera. 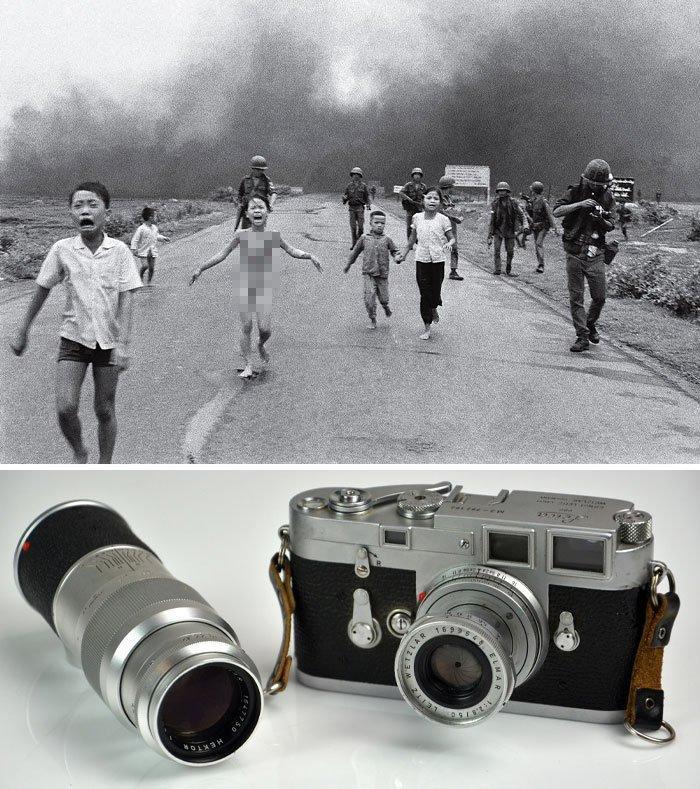 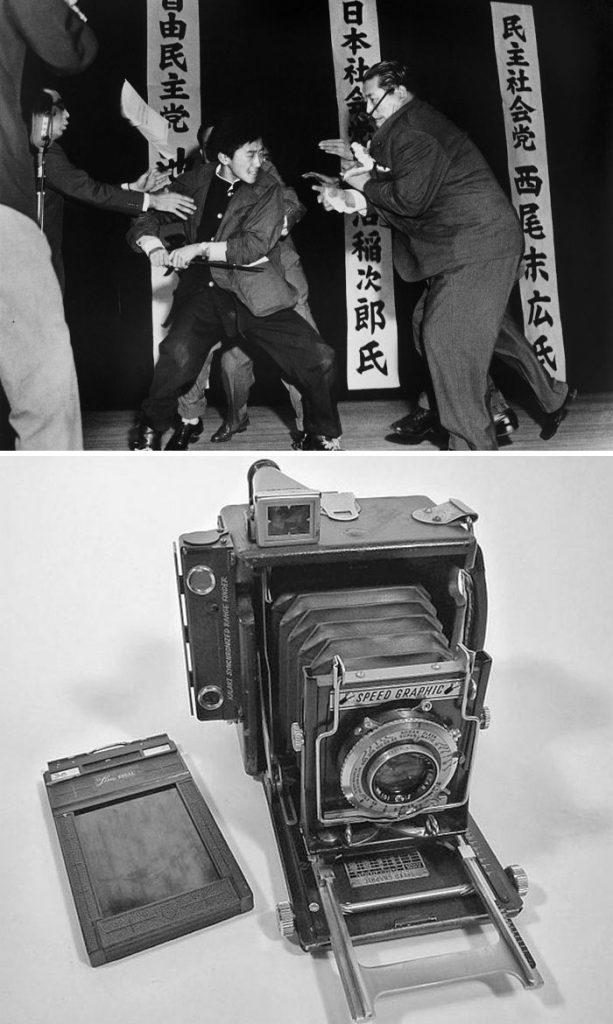 Photographer Yasushi Nagao captured the assassination of Japanese politician Inejiro Asanuma by 17-year-old Otoya Yamaguchi on October 12, 1960. The picture won the photographer a Pulitzer Prize and was named World Press Photo of the Year. 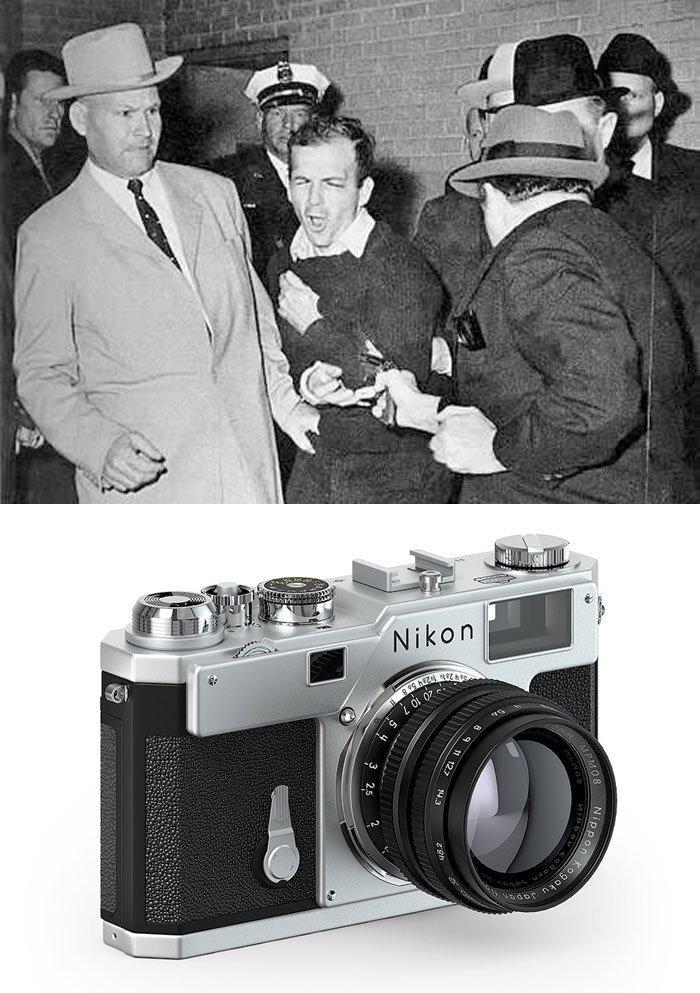 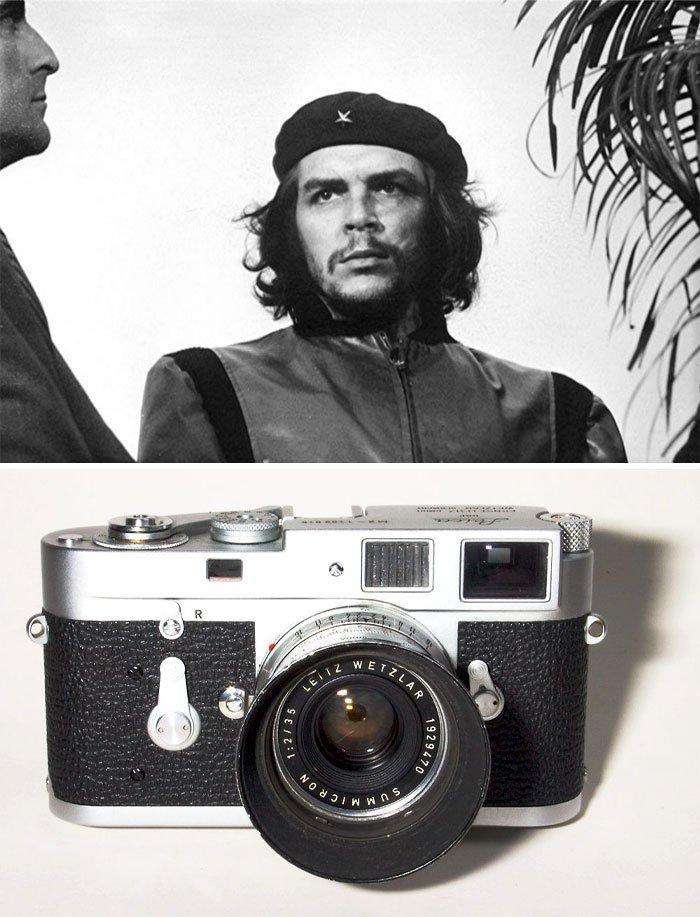 Photographer Alberto Korda took the photo of Marxist revolutionary Che Guevara in Havana, Cuba, back on March 5, 1960. Guevara was 31 years old when the picture was taken. 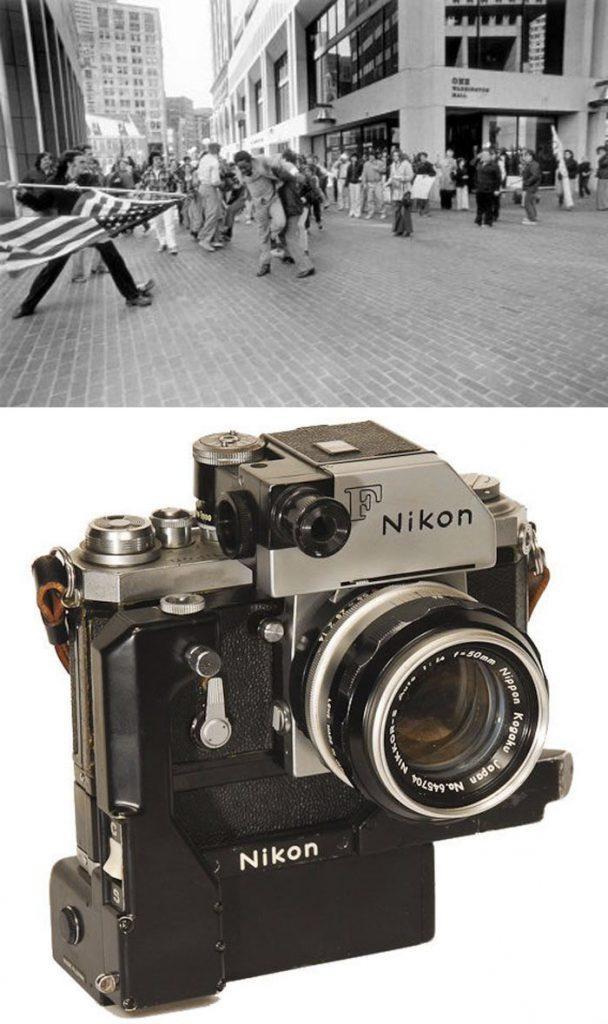 Photographer Stanley Forman shot this photograph titled “The Soiling of Old Glory” on April 5, 1976. It shows a white teenager, Joseph Rakes, attacking a black civil rights activist Ted Landsmark using a flagpole with the American flag. The photo went on to win the Pulitzer Prize.