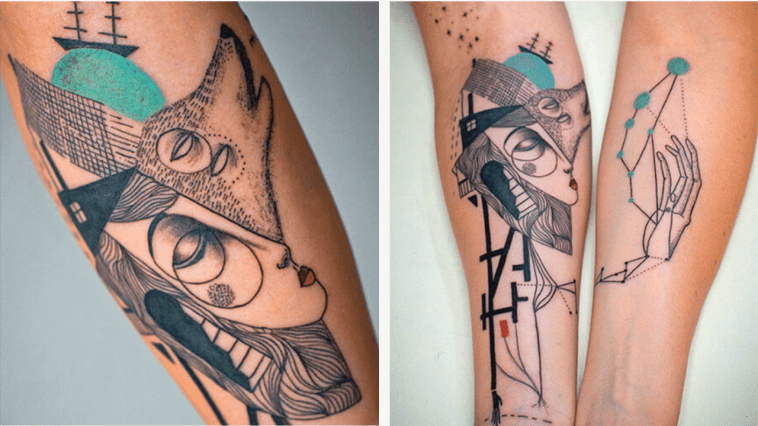 Cubism was popular in the early twentieth century, but at least two people are attempting to revive the style of modern art today – using other people’s skin as a canvas. Expanded Eye tattoo artists Jade Tomlinson and Kev James create beautiful cubist tattoo artworks that give this once-revolutionary art movement a new modern following.

On their website, they explain their creative process beautifully: “Each and every unique tattoo we create is our visual interpretation of concepts and stories provided by the client that hold significant meaning to the individual.” We incorporate as much personal detail as possible while allowing each tattoo design to organically evolve into a contemporary work of art, which we then transfer from paper to skin.”

Their cool tattoo style is especially appropriate given how popular line and geometric tattoos are among modern tattoo enthusiasts. Read on for some of the stories behind these tattoo ideas!

“Slovenian illustrator and puppet maker Zala’s tattoo is about intuition and the power of the beautiful mind.” “Exploring the positive and negative aspects of the idea that, while we have the ability to unconsciously dream things into being, we can also paralyze ourselves with fear.”

“Illias’ survival guide for existence is his tattoo and memories of his father.” Illias hopes his tattoo will give him the energy to go on, pursuing the freedom his father gave him.”

“Juliane from Germany, who grew up on the sea, asked for a piece to represent her ocean-obsessed parents’ unfortunate divorce.” “We depicted the circle of life as her mother, who she describes as an Esmerelda-esque traveling soul, and her calm and quiet silver fox of a father, both of whom still live on the sea.”

“This piece depicts Judith’s unconditional love for her identical twin sister, as well as the complexities and importance of discovering one’s own identity as a twin.” Judith learned to separate herself from the person she loves the most in the world and affirm herself as a singular being.”

“The [above] piece serves as a reminder to Carlos that we must fight to make the most of what we’ve been given.” This entails exploring, discovering, participating, sharing, and, most importantly, being constantly curious about every detail of life.”

“Namkha’s tattoo depicts the metamorphosis of an empowered woman/animal.” The transformation represents the duality between the everyday woman and the ‘Creatura,’ expressing the creative force carried throughout her life that gives her the strength to transcend herself.”

“The Cry of the Earth” is a depiction of our current man-made ecological crisis. Noille, a nature lover and active member of his local ecological association, contributes his efforts to halt humanity’s ever-increasing destruction of our natural environment.”

“Fashion photographer Naura’s tattoo depicts a very personal and distressing incident in her life.” The tattoo serves as a reminder of her decisions as she embarks on a new chapter in her life. “She feels as if she has been resurrected, emerging from the dark clouds that have hung over her for so long.”

“This piece tells the story of fox-girl Maren’s journey across the North Atlantic to find her ultimate happiness in Iceland.”

“The leaves in the above piece represent the four members of Paolo’s family.” Despite the fact that they are no longer physically together and the sadness that comes with dealing with this detachment, they will always be a part of one another.”

“We portrayed Erik’s love for his girlfriend, whom he described as his reason for living, as well as the happiness he found by raising a glass to life and dreams with his closest and dearest.”